People living in remote and rural parts of Manitoba may soon have access to an efficient and potentially life-saving kidney disease detector.

Dr. Navdeep Tangri, a University of Manitoba researcher and doctor at Seven Oaks General Hospital’s Chronic Disease Innovation Centre, is teaming up with a group of fellow scientists to fight back against kidney disease with a new, cutting-edge screening machine.

The digital hand-held device measures albumin, a protein found in urine. A healthy kidney will behave like a sieve, filtering out albumin, whereas a diseased kidney will let the material slip by.

“Protein in the urine is the first sign of kidney damage,” Tangri said.

The machine’s single-use chip registers a urine sample’s albumin levels with 99 per cent accuracy in five minutes or less. By comparison, under the current system, it can take days for a urine sample to arrive at a lab and undergo testing in Manitoba.

“It was very exciting for us,” Tangri said.

This technology’s immediacy significantly pares down the time it takes for health-care providers to uncover disease and create a treatment plan with the patient.

“Anything that streamlines the process of decision-making and provides that quantifiable knowledge to happen more quickly, it’s automatically going to be better for the patients in Manitoba,” said Greg Unger, executive director for the Kidney Foundation of Canada’s Manitoba branch.

Easy access to the technology will save patients the time and money associated with travelling to an urban centre for renal testing, Unger said.

“We hope that (these devices) become available in every doctor’s office or primary-care clinic. We also hope they become widely used for screening in remote, rural and low-income countries,” Tangri said.

Manitoba has some of the highest rates of kidney disease in Canada.

From 2011 through 2012, Tangri and his team did a widespread screening for kidney disease in Manitoba First Nations and found very high rates in northern communities.

“The machine we took up north was almost the size of a computer. It was cumbersome to measure urine protein,” Tangri said.

This initiative sparked the team’s idea to create a point-of-care, lightweight product to make testing easier and more mobile.

Early detection of kidney disease is critically important in treatment outcomes and was a key motivator to make the process more efficient, Tangri said, adding that transporting samples eats away at valuable time and has the potential to affect the material’s accuracy.

“If you’re young and you have kidney disease, if you start on treatment early, the treatments are so good that you could potentially avoid dialysis — you could never have dialysis in your entire life,” he said.

In 2019, 1,746 patients underwent chronic dialysis, the Winnipeg Regional Health Authority reported. The WRHA also found that between 2010 and 2019, the number of Manitobans on dialysis spiked by 45 per cent — surpassing the national average of 25.7 per cent.

Accurate screening is key to rooting out the disease, because symptoms that include itching, dry mouth and weight loss don’t always jump out as signs of something more serious.

“Oftentimes, people will not know they have some level of kidney disease until they get a test,” Unger said.

The new albumin screening device works in tandem with another of Tangri’s projects.

He made headlines in 2016 when 30 countries adopted his Kidney Failure Risk Equation — a formula that considers urine, sex, age and blood samples to determine a patient’s level of kidney function. The equation can predict with 90 per cent certainty whether a patient will experience kidney failure and require dialysis or a transplant up to five years in advance.

The team is working with the Canadian company Health Logic Interactive Inc. to manufacture and distribute the devices. Tangri anticipates the product will be in the hands of doctors and nurses in less than two years. 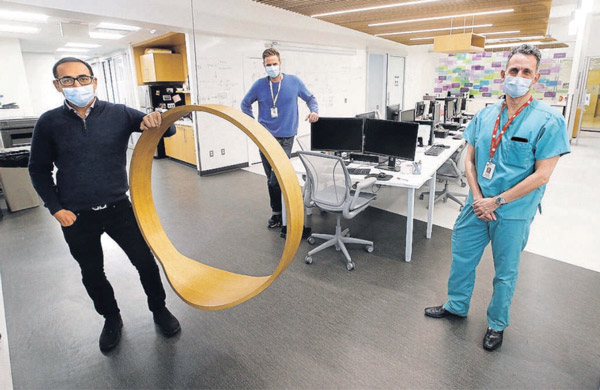